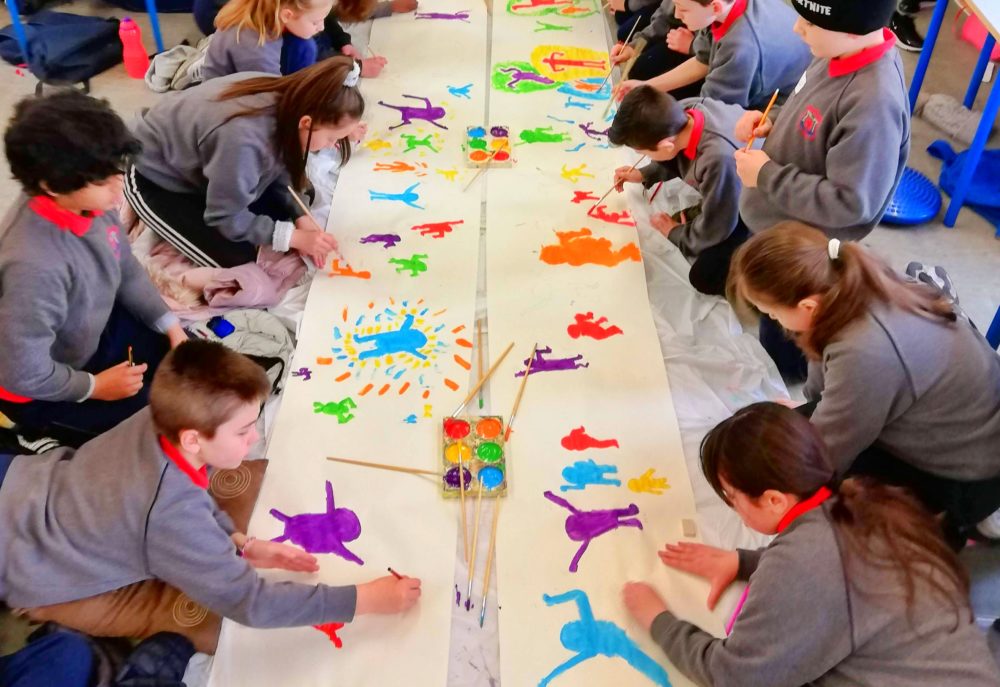 Ms. Walsh Room 30
Cake sale 2019
First of all, we would like to thank the Parents Association for all the work they did to make this event as amazing as it was. The cake sale took place on March 29th. We were in school bright and early, ready to start the busy day ahead. Once we were ready we got to work. We started off by collecting all the cakes and goodies that were made by all the children. With the help of the parents and Ms. Walsh, we started off the cake sale of 2019! We sold cakes and lots of homemade presents for Mothers Day. We had some of our class members dressed in costumes that the Parents Association rented.It was a busy but a fun, amazing day. It will be a great memory to bring with us to secondary school. Thank you for everyones help and we hope everyone is looking forward to next year!
By Caoimhe and Sonia Room 30
Here are some pictures from the day:

We also created some lovely pieces of art:

The Rugby Blitz:
On the 10th of January our class went on a trip to Malahide Rugby Club for a fun day of rugby. The other schools that attended were Holywell N.S. and St. Marnock’s N.S. Our class was split into two teams. One of our teams won all the games they played. The other Holy Family team won, drew and lost. However for both teams it did not really matter how many times they won or lost because we had fun. We all really enjoyed the day.
By Aaron Bollard Room 30

Our Class trip to Glasnevin :
Yesterday we went to Malahide Park, Glasnevin Cemetery and the Botanic Gardens. We took the bus and we learnt a lot in the graveyard. First, the bus brought us to Malahide Park. We stayed there for about forty minutes. We got on the bus again and it brought us to Glasnevin Cemetery. Each class got their own tour guide. Our tour guides name was Gráinne. She brought us to the Republicans plot and told us some facts about the graveyard, such as, there were 1.6 million people buried in the graveyard and it was established 187 years ago. We saw Countess Markieviczs grave and we learnt that she was the first female elected in Ireland to become a MP. We saw Elizabeth OFarrells grave and we were told that she was Erased out of history.
We saw Eamon de Valeras grave and we were told that his original was Eamon de Valero, but it was changed so it can sound more Irish. He was spared execution because he was American. We also saw Grace Giffords grave, where she was buried with her parents-in-law. We then went to Daniel OConnells grave. It was a round tower, which was Irelands youngest and tallest round tower. On the inside of the tower there was the grave. On the walls it said My body to Ireland, my heart to Rome, my soul to heaven. We touched the coffin, as it is said to give you good luck. Gráinne locked the door of the tower because once, people tried to bomb it. We went to the cholera pit where Charles Stewart Parnell was buried. He had said he wanted to be buried with normal people, so he was buried in a pit where 11,000 people, who had died from cholera were buried. An estimated 200,000 people attended his funeral. We went to Roger Casements grave which was near the entrance of the cemetery because he wanted to be buried in Antrim. Lastly we went to see Micheal Collins grave. There were lots of flowers on his grave. He was born in cork .We departed from the cemetery and went to Botanic  Gardens. We had our lunch there and then got the bus back home.
Written by Maia, Typed by Blessing and Kasha.

Our Titanic projects:
In January we did a unit of work on Titanic. We worked together in groups to create a project to present to the class. We had to think of creative ways to make each project different, some people did 3D projects, some power point presentations, some did a flip book style project and some people used Drama during their presentation.We came with research categories and each group had to divide up the work evenly. We had a lot of fun making our projects and we learned a lot from each other. It was a great learning experience having to present the project in front of all our classmates.
By Kate Higgins

Swords Castle trip:
On the 25th of September 2018, all the sixth class pupils and teachers went on a trip to Swords Castle. We started our journey by going to St.Columbas Monastery where an old round tower was. Mr.Byrne acted as a tour guide and told us all about it like how it was built over 1000 years ago in 516 AD.

Afterwards, we went to Swords Castle where we learned a lot about it. It was built around 1200AD and it was for when the Archbishop John Comyn came to collect rent he would stay in the castle. Swords translates to The Pure Well. The reason behind this name is that many years ago there was a hospital to cure people with leprosy.
We got to have a look inside the castle and visit all the rooms. There was a long twisty staircase leading up to a big room with a giant wooden table and an olden day chandelier. There was also a room to the side that had a plank with a hole that served as a toilet. There was a small church that had a step up to the alter which was covered in tiles that were there to ward off the devil.
We have to admit that we preferred swords castle because it was more interesting and there was a lifetime  supply of apples scattered across the ground (not in edible condition though).
By Kate and Caoimhe Room 30

A selection of work from Ms. Walsh’s class:
This is our Random Acts of Kindness Tree. This Advent we are going to do an act of kindness everyday.

We are also trying to come up with weekly positive messages to display on our Sacred Space. We like to have a positive start to our week in Room 30.

Here is a selection of some of our wonderful pieces of Art.

Here are some of our wonderful poems from our buddy poets 🙂

At Halloween our wonderful teachers also wore costumes. Thanks Ms Ralph for the wonderful idea.

Ms. Nolan Room 28
A selection of the Artwork from Ms Nolans class.

Ms Nolans Class
Wednesday 26th September.. Ms Nolan brought her class to visit St Columbas Church and Round tower today. They got time to look around the grounds of the church and got a close up view of the round tower. They then went on to Swords Castle, where they had a tour of the chapel and climbed the steep stairs of the Constables Tower. A great day out for all the students.